The timing of the surgery is critical, and is specific to the breed of dog

As the dog grows the top of the tibia levels, in essence the final result is the same as the TPLO, but with a much less aggressive surgery 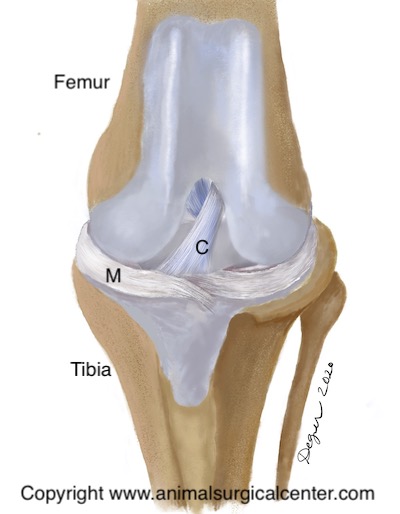 Wagon Model Used to Explain Instability of the Knee Joint

Clinical signs of early cruciate disease includes stiffness or very mild lameness. As the disease advances and the ligament progressively tears, the lameness becomes more pronounced. Some dogs show no lameness and then become profoundly lame after chasing a squirrel or other explosive activity.  Complete tear of the ligament initially results in nonweight-bearing on the limb, but as time goes on the dog will assume a weight-bearing lameness. It is unusual that the lameness will resolve in a large breed dog without surgery. 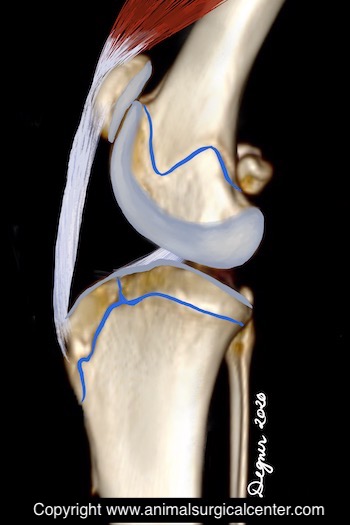 One of the challenges that the orthopedist faces is rupture of the cranial cruciate ligament in very young dogs (6 months or less). As mentioned above, arthritic changes progress rapidly with the traditional techniques that have been used in the past. As a result, this is not an ideal treatment. The standard TPLO is also not ideal for very young dogs either, as the growth plate is cut during the procedure, which may result in deformity of the bone as the dog grows

The dynamic tibial plateau leveling procedure (TPLP), can be used to treat cranial cruciate ligament rupture in growing immature dogs. The timing of the surgery is critical, and is specific to the breed of dog. This technique involves placing a screw in the cranial aspect of the growth plate of the tibial plateau. Growth is stopped at this region of the tibial plateau, yet the caudal aspect continues to grow. Over time the tibial plateau angle is leveled. The amount of leveling of the plateau is dependant on the preoperative tibial slope and the age of the dog at which the procedure is performed. 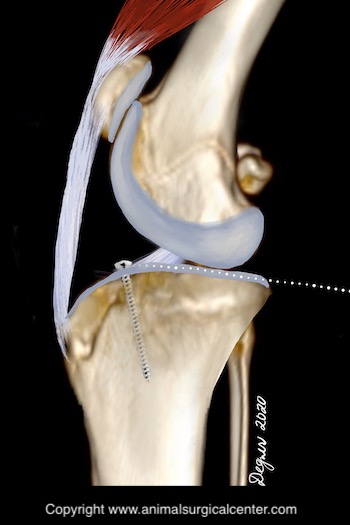 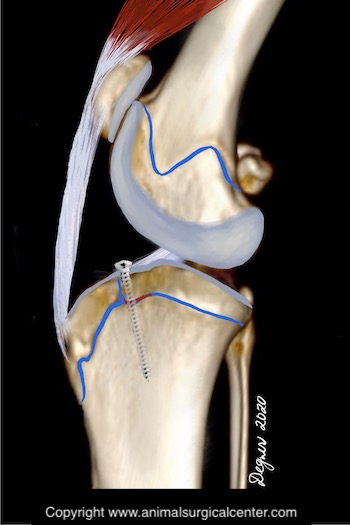 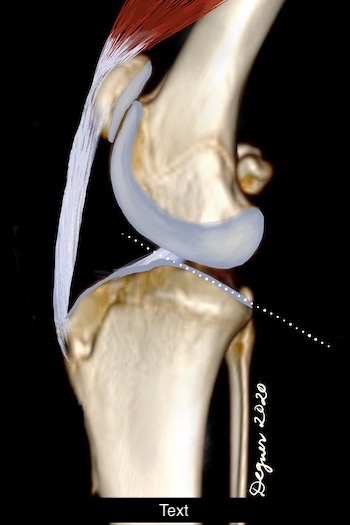 Below is a preoperative and postoperative dynamic TPLP radiographs. Take note of the 26 degree slope at the time of surgery; the cancellous screw is placed at the cranial aspect of the tibial plateau. Four months later the tibial slope has decreased to about 4 degrees. 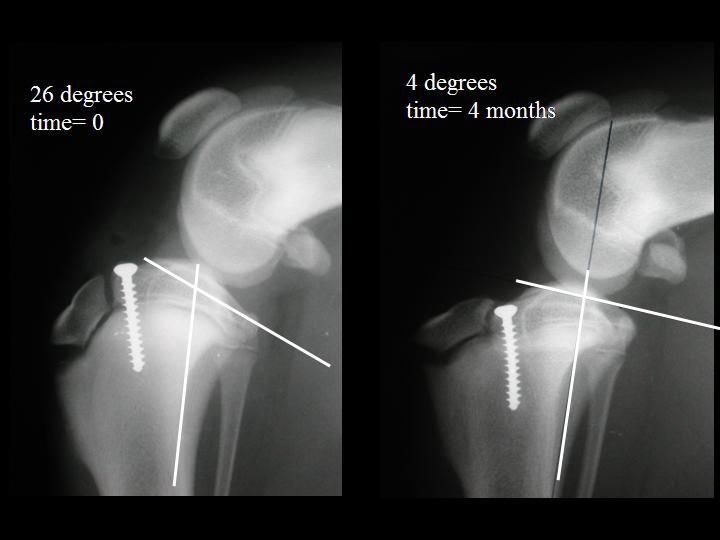 Typically patients receiving the dynamic TPLP have a fairly low morbidity rate associated with the procedure. Postoperative pain appears to be fairly low, as minimally invasive techniques are used to perform the procedure; therefore, these patients can return home the same day as the procedure is performed. Exercise is limited to leash walks for about 2 months. Typically, this is the period of time during which the lameness resolves. To evaluate the effect of the procedure, radiographs of the tibia are taken initially at 8 weeks after surgery, and then every 1 to 2 months until the dog has matured.

Benefits of the dynamic TPLP

Advantages of this technique include short recovery from surgery, minimal pain, and good clinical results. If indicated, the procedure can also be safely performed bilaterally.