+ A patent ductus arteriosus is a normal structure found in the unborn human and animal, however, by the third day after birth it usually closes

+ A PDA shunts blood back to the lungs and heart, which results in heart failure

+ Corrective surgery is more successful if done in the young animal, before permanent heart damage has occurred 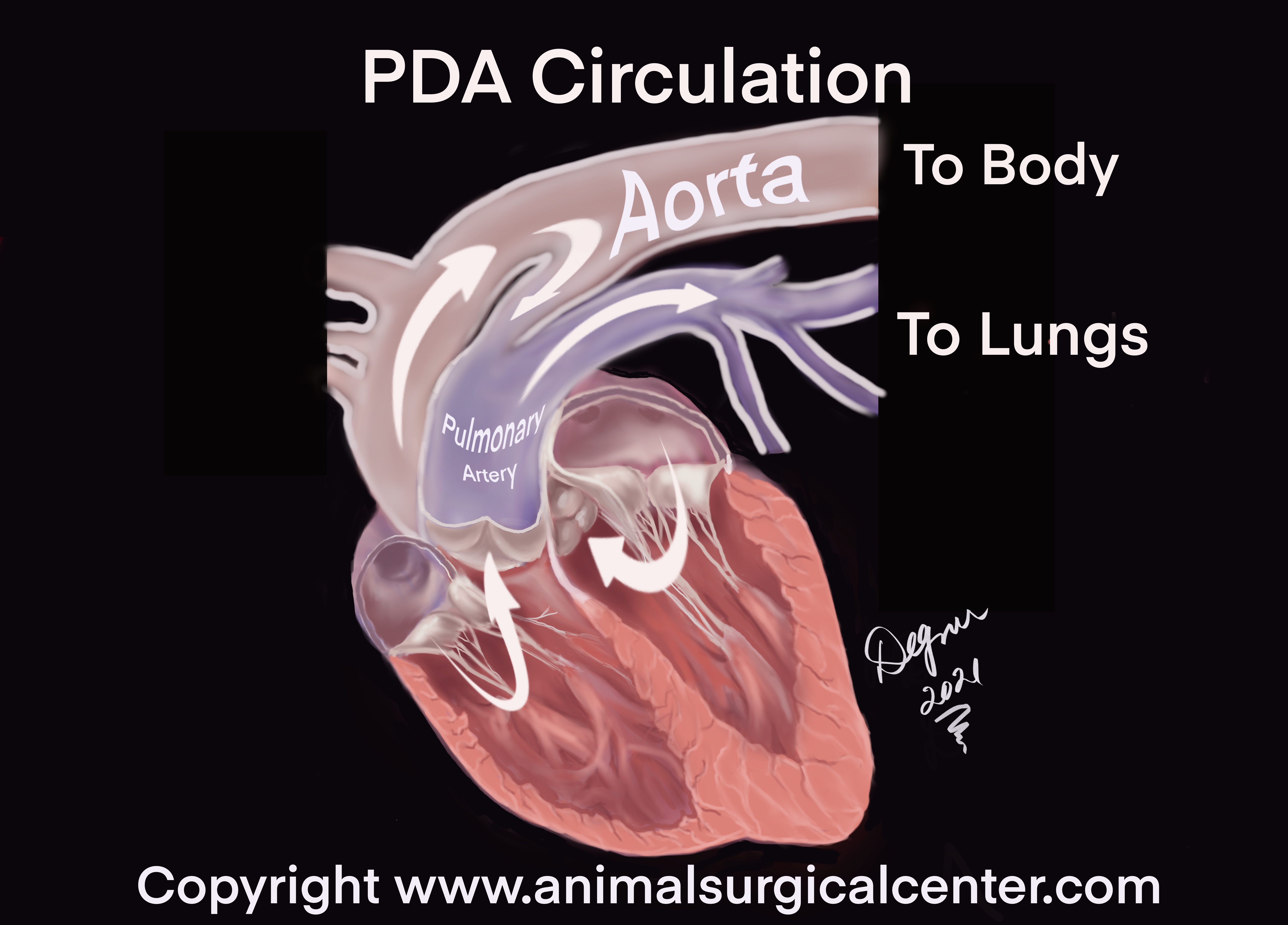 Why do dogs have a ductus arteriosus?

The unborn cat and dog have a system of shunting blood through special vessels so that certain organ systems do not have to work. In the fetus, certain organs such as the lungs and liver are not required to function, as the mother does the cleansing and oxygenation of the blood via the placenta. One shunting system shunts blood to bypass the liver. Another shunting system causes blood to bypass the lungs. This shunt or large vessel is called the ductus arteriosus.

What is a Patent Ductus Arteriosus? 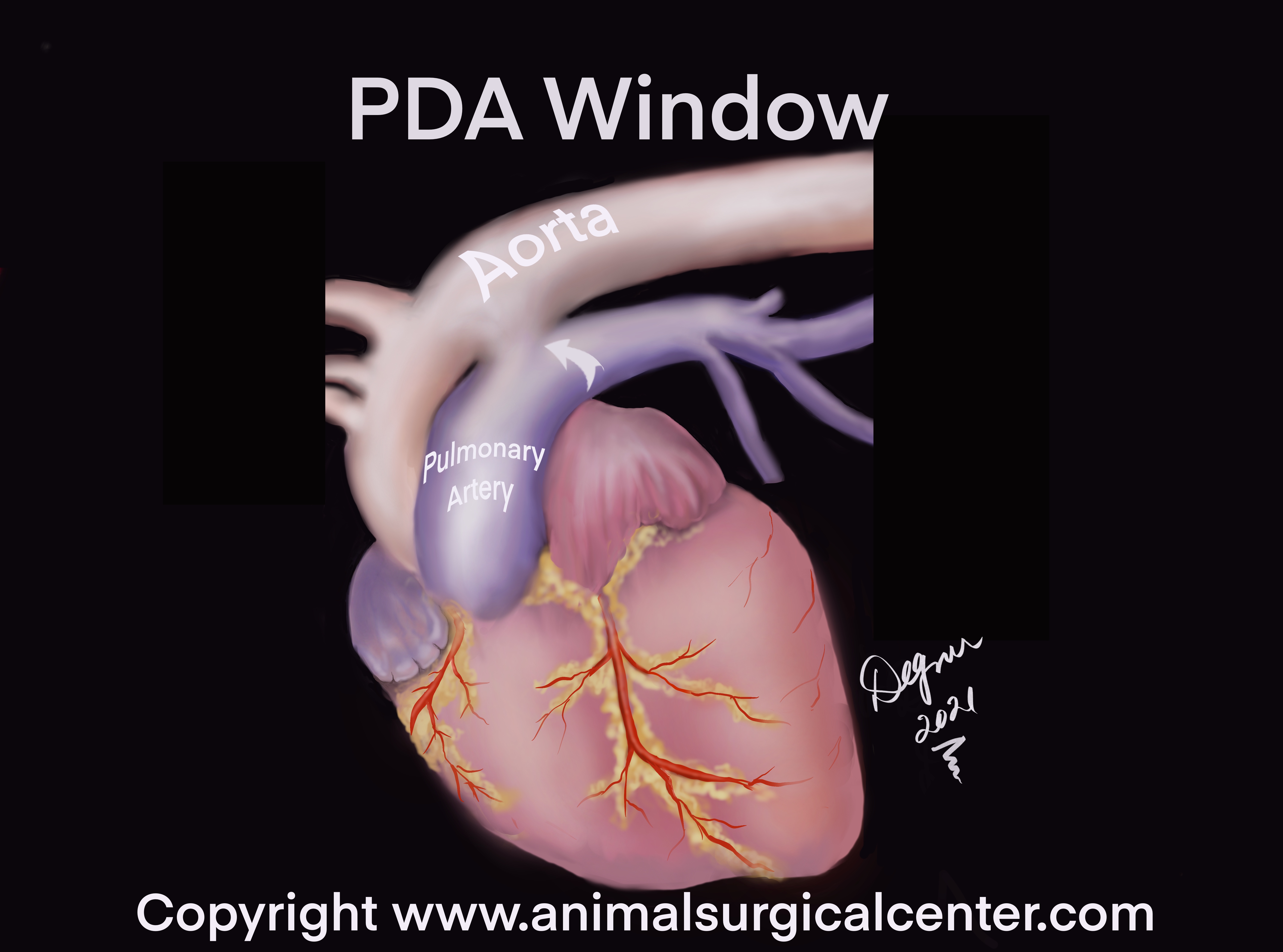 Regardless of the confirmation of the PDA, the ductus allows blood to pass through the heart, thus bypass the lungs. After birth the pressures change in the heart so that the blood moves in the opposite direction, from the aorta into the shunt, then into the lungs. This causes increased amount of blood flow to the lungs and can cause fluid to build up in the lungs, thus results in labored breathing.

Upon physical exam, a short bounding arterial pulse, a continuous thrill may be felt at the over the chest at the location of the heart, and a continuous heart murmur is detected with the aid of a stethoscope. The gums are pink unless there is a severe build-up of fluid in the lungs from heart failure.  EKG of the heart may show evidence of enlargement of the left ventricle and atrium. If the heart muscle is diseased, abnormal heartbeats may be present.  X-rays may show over circulation  of the lungs, left atrial and left ventricle enlargement and dilatation of the main pulmonary artery and descending aorta.  Ultrasonographic evaluation frequently reveals left-sided heart enlargement, dilatation of the aorta dilation of the pulmonary artery and a patent ductus arteriosus. Animal Surgical Center Of Michigan requires every pet referred to us for PDA ligation to be evaluated by a board-certified cardiologist prior to surgery.

If congestive heart failure has developed, the patient is stabilized with medication prior to surgery. 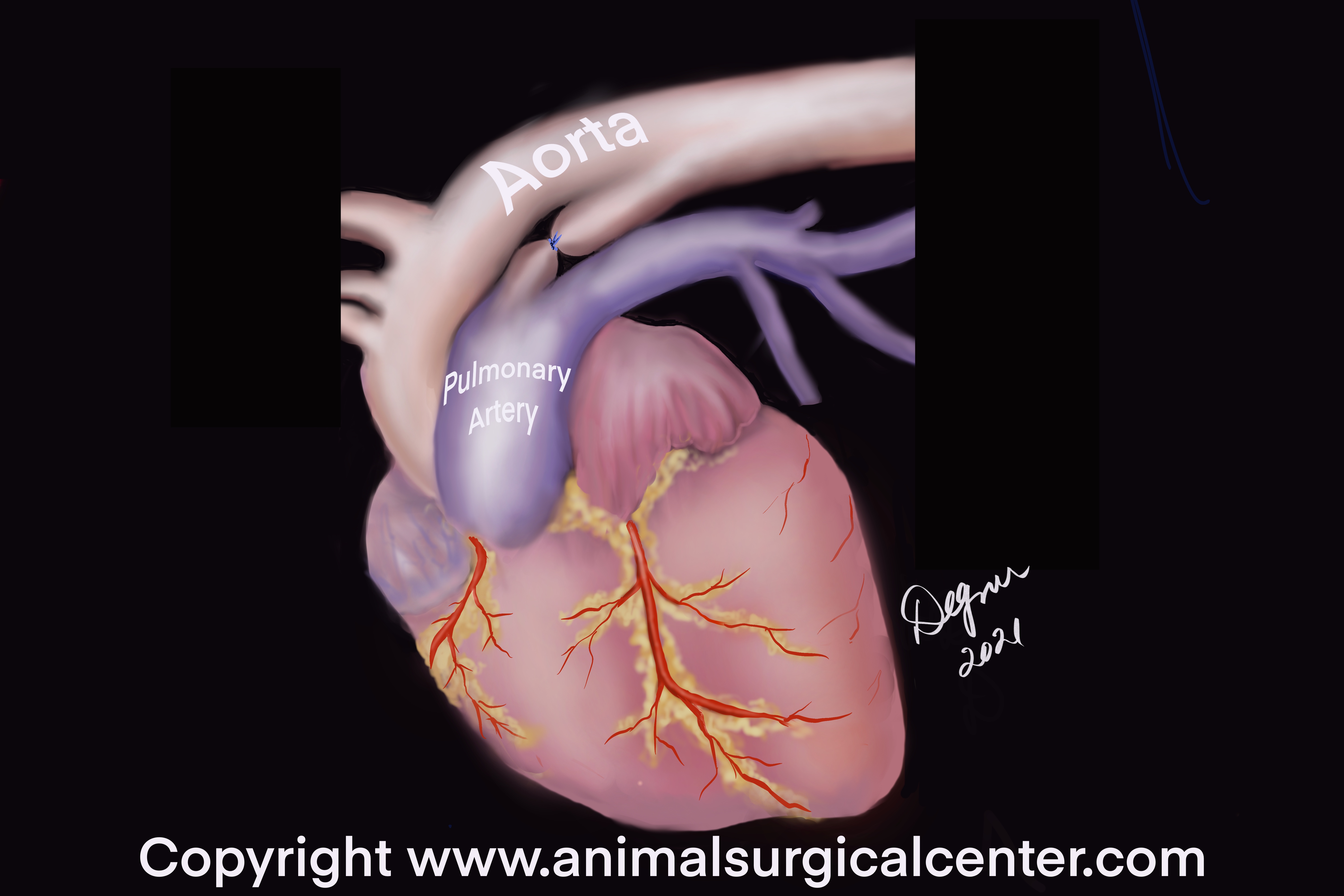 The treatment of choice for patent ductus arteriosus is surgical ligation of the ductus. Sutures are placed around the ductus and are carefully ligated by the surgeon. A PDA window is a more difficult surgery to perform. As soon as the PDA is ligated heart failure is instantly reversed. Prognosis with surgery is excellent, and within weeks after surgery the pet’s activity can return to normal. If surgery is not performed, pets afflicted with a PDA usually die of heart failure.

As with any surgery, complications may arise. Even though rare, anesthetic death can occur. With the use of modern anesthetic protocols and extensive monitoring devices (blood pressure, EKG, pulse oxymetry, inspiratory and expiratory carbon dioxide levels, and respiration rate), the risk of problems with anesthesia is minimal.

Occasionally the backside of the ductus will tear as it is being dissected. This could result in death of the pet. If the bleeding is not too severe, but starts up again as the dissection continues, ligation of the ductus. With the experience of our surgeons, it is extremely rare that a PDA cannot be successfully ligated, even if bleeding is encountered.

Approximately 1.5% of animals with patent ductus ligation Will develop recanalization of the ductus. With this, the murmur returns usually within two months of operation. A recanalized ductus is divided and sutured. This procedure requires reoperation of the same surgical space except this time the ductus is clamped and cut with a blade and each end will be sutured. This procedure is far more difficult than the ligature procedure and is used mostly by individuals with previous experience in vascular surgery.

Infection is also an unusual complication as strict sterile technique is used during the surgery and antibiotics are administered.

Seroma formation or fluid accumulation under the skin incision, although uncommon, can also occur. This problem will resolve with time. Occasionally the seroma may require draining.