Luxation or dislocation of the hip causes severe lameness

Closed reduction of the hip is generally recommended in most cases, but open hip reduction may be needed. 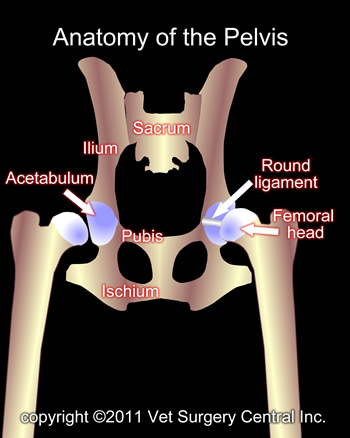 The pelvis is made of four bones: the ilium, acetabulum, pubis, and ischium. In the immature animal, these bones are not fused together, but as the pet matures, these bone fuse together in one confluent bone. The ilium is attached to the lower part of the spine called the sacrum.

The hip joint consists of a ball (femoral head) which is at the end of the femur bone and socket (acetabulum). This joint joins the hind limb to the pelvis. The joint is held together with a very strong round ligament (also called the teres ligament) and the joint capsule. The muscles that surround the hip joint also provide very good support to the joint.

What is a hip luxation?

A hip luxation (dislocation) is a separation of the head of the femur from the acetabulum. In essence, the joint is torn apart and this typically required significant trauma. During the injury, not only are the round ligament and joint capsule torn, but the hip muscles frequently also are damaged. Typically, this type of dislocation will be due to a blow to the pelvis. Occasionally this type of dislocation will occur only with minimal trauma. With such cases there is always a concern that the dog may have a shallow acetabulum. This could be a form of hip dysplasia.

Because of the upward forces on the hind limb from weight-bearing, the hip most commonly will dislocate in an upward direction and this is called a craniodorsal luxation (illustration below left). This accounts for 95% of all hip dislocations.

Other cases may have a dislocation of the hip in which ball of the hip ends up under the pelvis in a hole called the obturator foramen (illustration below right). This type of dislocation occurs as a result of the dog doing the “splits” with the hind limb. 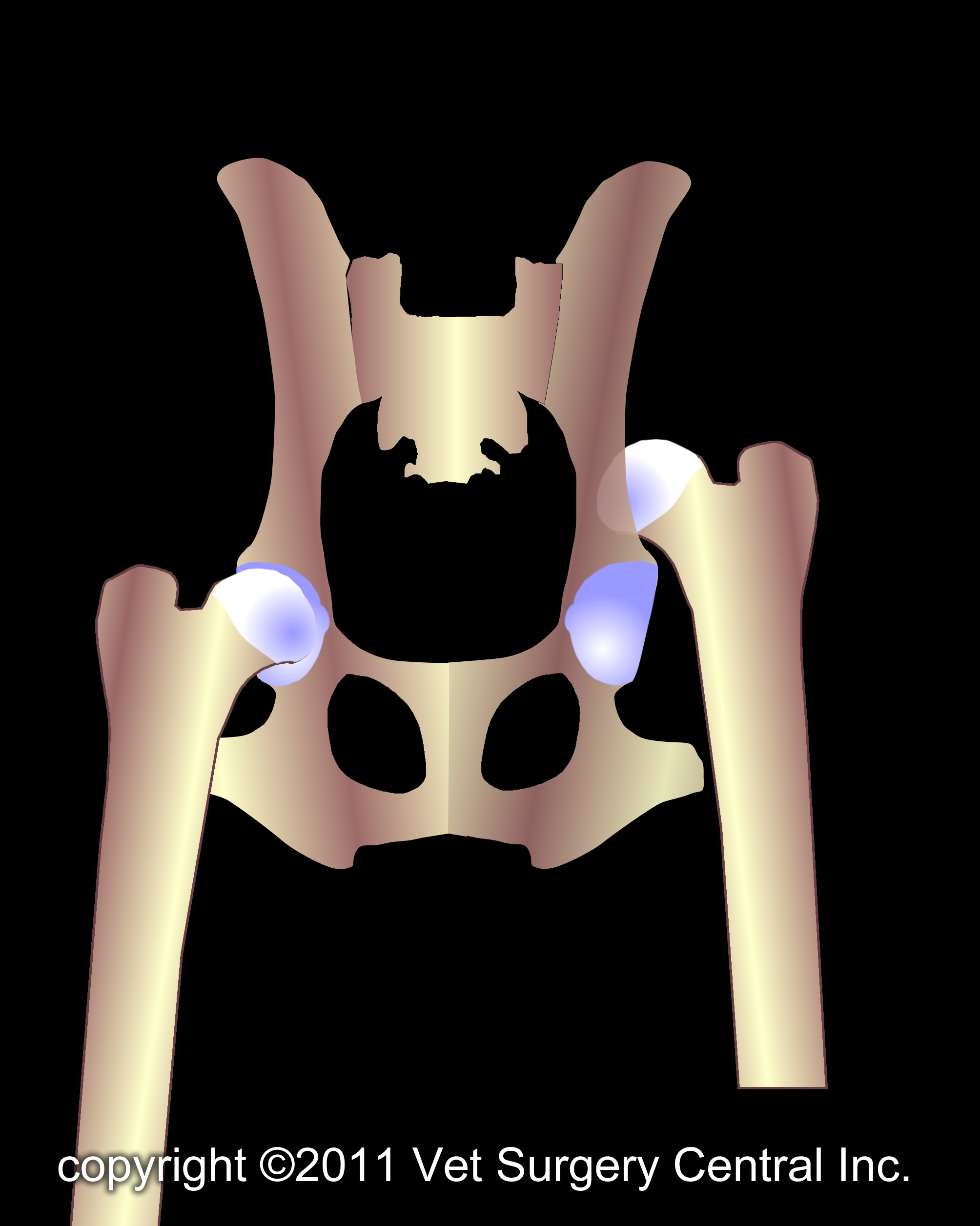 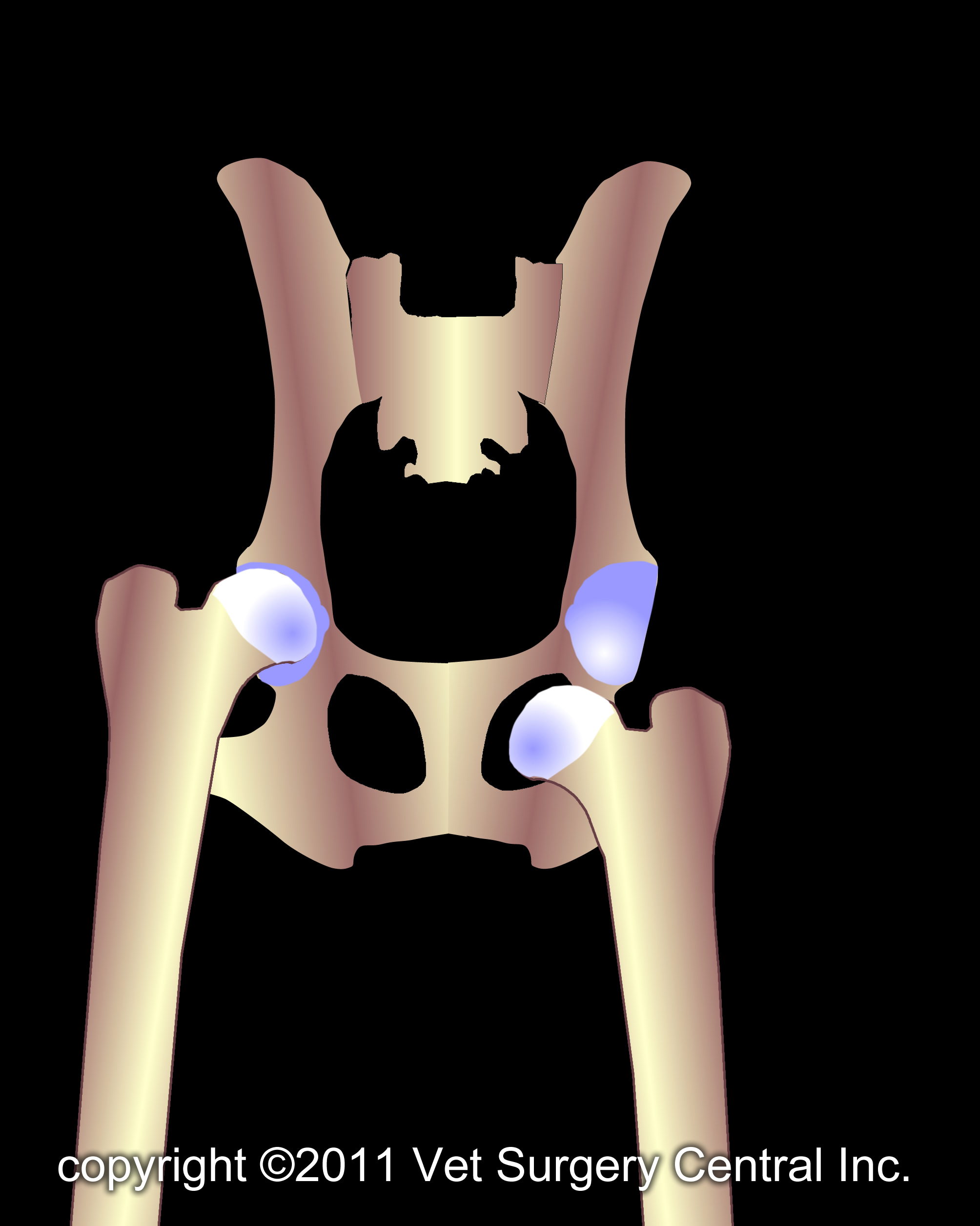 Hip dislocation is seen in all breeds of dogs and cats. Most dogs are mature (greater than 1 year) when this happens. If the animal is immature, a fracture of the femoral head (slipped capital physis) is more common. Acute severe lameness is the primary warning sign of a luxated hip. Craniodorsal hip luxation results in nonweight-bearing and external rotation of the knee. Caudoventral luxation results in an abducted position of the limb. After the hip dislocation has been present for weeks, the pet will bear weight on the limb, but usually persistent lameness is noted. Cats, on the other hand, may become completely sound (no lameness) on the affected limb.

A veterinarian will be able to feel swelling over the dislocated hip. In addition, the veterinarian will be able to feel the luxation and typically can diagnose which direction the hip has luxated; however, a fractured hip may also have similar physical examination findings.When comparing limb length, the craniodorsal luxation results in a shorter limb; whereas, the caudoventral luxation results in a longer limb (when compared to a normal contralateral limb).

Blood work will be done on the pet prior to anesthesia and surgery. The pet should be fasted, as instructed by the pet’s surgical team. Water is usually permitted up to the time of admission to the hospital. The pet’s surgeon may prescribe an antacid such as Pepcid AC, which should be administered by 6 AM on the day of surgery; this treatment will help reduce the risk of esophagitis (heartburn) in the postop period. The surgical team should be informed of any medications that the pet is currently receiving. The pet should not receive any aspirin within 1 week of surgery, as this medication will thin the blood and increase the risk of bleeding. Just prior to surgery, the pet will receive a sedative, have an intravenous catheter placed for the administration of intravenous fluids and intravenous medications, be induced under general anesthesia with medication(s), and have a breathing tube (endotracheal tube) placed to allow delivery of oxygen and gaseous anesthesia. The surgical site will be clipped and cleansed with an anti-septic solution in preparation for surgery. While under general anesthesia, the pet’s breathing will be assisted with a ventilator and vital parameters such as heart rate, respiratory rate, core body temperature, blood pressure, oxygenation of the blood (pulse oximetry), exhaled carbon dioxide (capnography), and heart rhythm (EKG) will be monitored to ensure the pet’s well being. Pain will be controlled both during and after surgery with analgesics (pain-controlling medication). Please note that each surgical and anesthesia team may elect to chose a different, but effective analgesia protocol. 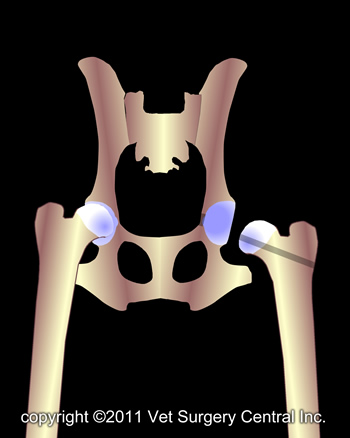 Candidates for closed (nonsurgical) or open (surgical) reduction of a hip luxation include those that do not have hip dysplasia or arthritis of the hip for other reasons. Candidates also must not have evidence of a fracture of the hip joint (femur or acetabulum). Dogs that are not candidates for hip reduction should have a hip replacement or a femoral head and neck excision.

Closed reduction, which means that the femoral head is manually reduced back into the acetabulum, is typically the first line of treatment for a luxated hip. Although no surgery is needed with this treatment, anesthesia is essential (for humane reasons). An Ehmer sling is placed on the affected hind limb for 10 to 14 days to prevent weight-bearing. Commercially available reusable slings are also available and are more comfortable for the pet (www.dogleggs.com). If the hip cannot be reduced or pops out of the joint with minimal force, surgery is recommended. If the hip has been luxated for more than a few days, concurrent pelvic fractures are present, or if the hip does not feel stable at the time of closed reduction, then open surgical reduction is indicated.

Surgery entails reducing the femoral head into the acetabulum and securing the joint together with artificial ligaments. The technique that I prefer is the Toggle technique. This involves drilling a hole in the wall of the acetabulum at the insertion site of the round ligament, drilling a bone tunnel through the femoral neck, threading a toggle pin attached to heavy suture material through the hole in acetabulum, threading the suture through the bone tunnel in the femur bone, and then tying the suture to a toggle pin on the side of the femur bone. In addition, the torn joint capsule is sutured. An Ehmer sling is kept on the pet for 10 to 14 days after surgery to prevent weight bearing. 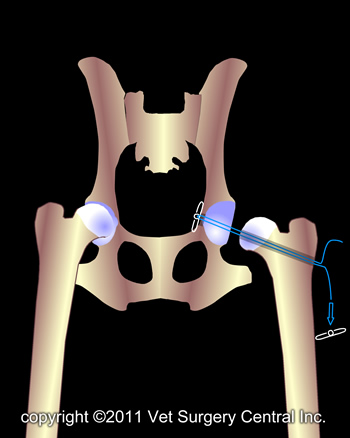 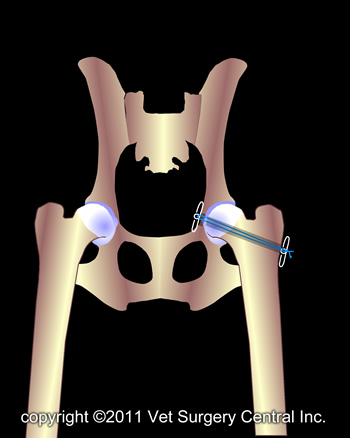 A caudoventral luxation of the hip can be treated with closed reduction and hobbles placed on the hind limbs (at the level of the knees to prevent the pet from doing the “splits”. If conservative efforts fail, open surgical reduction of the hip and postoperative hobbling is recommended. Another alternative is femoral head and neck excision.

After care and convalescence

A prescribed oral pain reliever should be administered in the postop period at home. Nonsteroidal anti-inflammatory medications may be a part of the pain management protocol, but long-term administration of this medication is not needed. In some cases, antibiotics may be prescribed.

A bandaid may be applied to the incision until it is sealed. This bandaid should be kept clean and only needs to be kept over the incision for about one or two days. The incision should be checked daily for signs of infection during the first few weeks after surgery.

During the first 2 weeks after surgery, an Ehmer sling is kept on the limb.

A bath towel or commercially available sling can be used for this purpose. Exercise restriction must be continued for 3 months. During the first 2 months the pet should be kept in the house on good footing (avoid slippery flooring); if needed put some throw rugs or strips of outdoor carpeting material on slippery floors. Short leash walks are permitted for elimination purposes. After the first 2 months, leash walks can be initiated and gradually increased.

Within a few days after the sling has been removed, most dogs will start to bear a mild to moderate amount of weight on the operated limb. By 6 to 8 weeks, the lameness should be gone. By 3 to 4 months after surgery, the pet should be completely sound on the operated limb with no residual stiffness. If arthritis has developed in the joint, residual stiffness may be evident after napping or with heavy exercise.

The success rate of closed reduction of a hip luxation is 50%. The success rate of open reduction is 80 to 90%. Persistent lameness is seen about 30 to 35% of cases and is due to arthritis that has developed in the joint. It is possible that underlying issues are at hand in these cases such as hip dysplasia or major damage to the cartilage of the joint from the initial injury.

As with any surgery, complications may arise. Even though rare, anesthetic death can occur. Infection is also an unusual complication, as strict sterile technique is used during the surgery and antibiotics are administered during surgery. Excessive activity or exercise within the first 2 months can also lead to complications. The artificial ligament that is used to hold the hip in place could loosen or even break, resulting in luxation of the hip again. If this occurs, the repair could be done again, but in some cases, a femoral head and neck excision or total hip replacement may be needed.

The sciatic nerve which passes around the hip joint could become bruised or damaged, which could result in loss of function of the limb. This is an unusual, but typically temporary complication. Another complication could be severe progression of hip arthritis. In the event that this occurs and your pet has painful hip joints, a total hip replacement or femoral head and neck excision may be needed. Some arthritis will develop in the hip joint, but usually does not cause clinical lameness/stiffness. Development of severe arthritis that causes profound lameness is uncommon.