Dislocation of the kneecap is painful and results in lameness

Evaluation of limb alignment may be recommended, especially in large breed dogs to assess the need to correct this; failure to address this can result in increased failure rates

Concurrent cruciate ligament injury may be present in dogs that have a dislocating kneecap, therefore this may also need to be addressed

Prognosis generally is very good – the higher the grade of the patellar luxation, the greater the failure rate unless more corrective surgeries are done

The patella also known as the kneecap normally rides in the trochlear groove which is located at the bottom of the femur bone.  The quadriceps muscles are attached to the top of the patella. The patellar ligament connects that patella to the tibia on a bony protrusion called the tibial crest. Ligaments on the sides of the patella prevent it from dislocating out of the groove.  The illustration right shows the patella dislocated out of the groove. 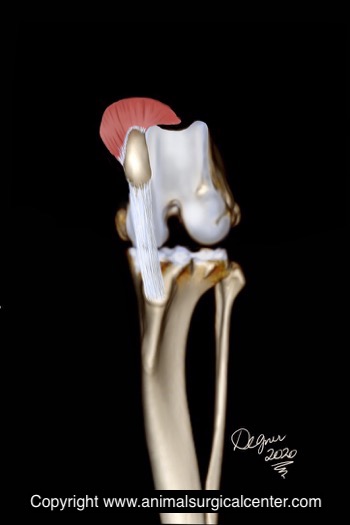 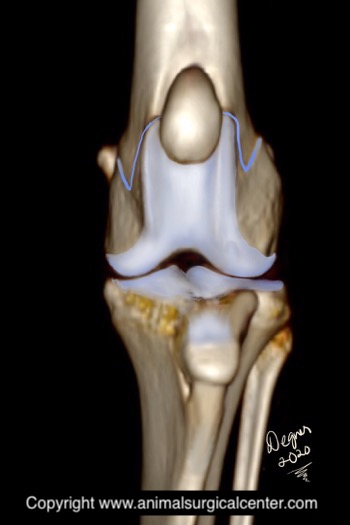 Patellar luxation is caused by congenital abnormality usually at the level of the hip joint and results in abnormal forces on the kneecap, which cause it to eventually ride outside of the groove. The groove becomes very shallow and the attachment of the ligament of the patella may be malpositioned on the tibia bone. If the patellar luxation occurs in immature animals, the tibia and femur bones become twisted.

Stiffness of the hind limb

Some pets show only a single sign, whereas others show many signs of the condition

During the surgery, the surgeon will make an assessment as to which procedures are best suited to correct patellar lunation in your pet. If the trochlear groove is shallow, it will be deepened.  If the cartilage has been damaged, the surgeon likely will perform an excisions trochleoplasty, however, if the cartilage is in good condition, a block trochleoplasty will be performed. In this procedure two vertical and on horizontal bone cut will be made (see below left). A block of cartilage and bone is lifted off the bed (see below middle). Additional bone is removed from the raw bone bed and the cartilage/bone plate is replaced creating a deep groove for the patella to ride in (see below right). The benefit of the block osteotomy is that it uniformly deepens the groove from top to bottom and preserves the cartilage that the patella rides on. 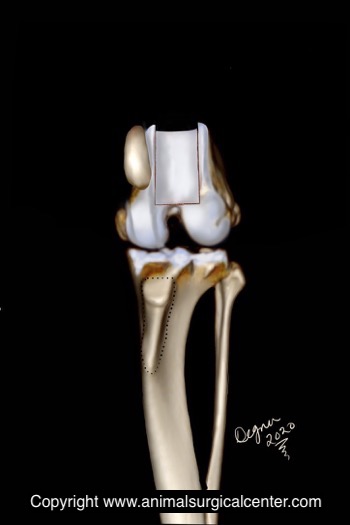 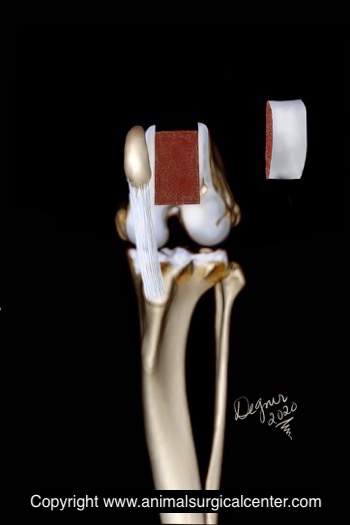 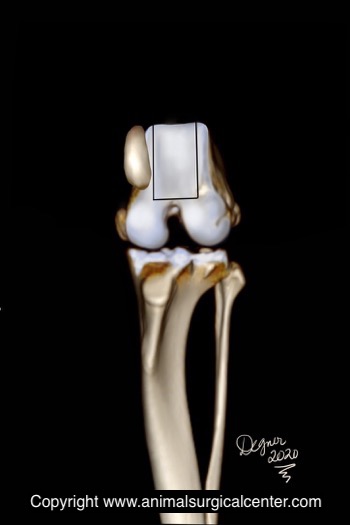 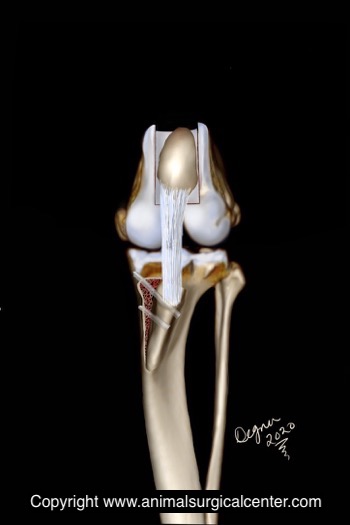 If the attachment of the patellar ligament to the tibia, called the tibial crest, is in the wrong position, it is repositioned. This is done by creating a cut in the tibial crest and reattaching the bone in a position so that the patella is realigned within the trochlear groove. Pins are used to fasten the bone in place (see illustration right).  The pins usually do not need to be removed unless they migrate out of position or a bubble of fluid (seroma) develops over the end of the pin and does not resolve after a few months.

The soft tissues along the side of the patella usually are stretched and are tightened to provide additional support to keep the patella in the trochlear groove. 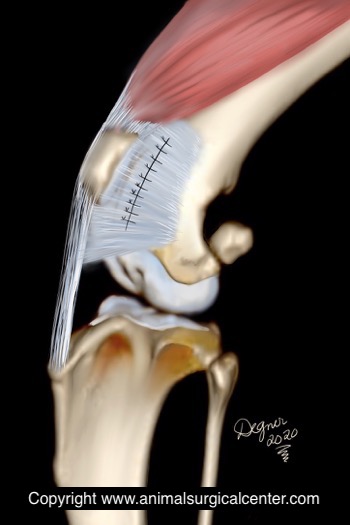 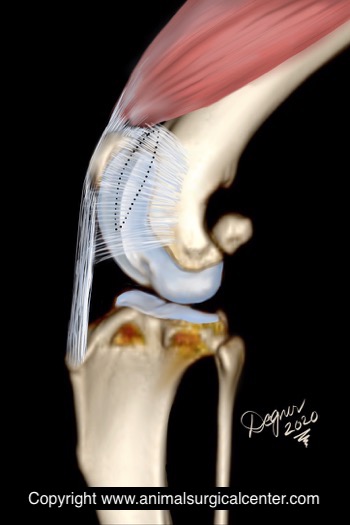 The femur bone may be twisted in some dogs which worsens the condition of the luxating patella. Dogs that have a greater than a 14 degree bowing (varus) of the thigh bone should have this surgically corrected. CT scan is usually made in large breed dogs to check for this problem and a 3D printed model can be made for surgical planning purposes.

How to care for your pet after surgery

Surgery is only one part that will lead to a successful outcome.  The second part is on the pet owner.  Prescribed medications should be given to make sure that the pet's pain is well controlled, antibiotics to prevent infection and sedatives if the pet is hyperactive.  Exercise must be restricted.  Walking on the limb is not going to hurt the operated limb, but explosive activity is dangerous. Rehabilitation therapy is done at home and the recovery process may also be accelerated with the help of a rehabilitation therapist.  Below is a video that demonstrates range of motion exercises that should be done after surgery.  Your pet must not lick the incision, therefore an Elizabethan collar should be worn for the first 2 weeks after surgery.

By 10 to 14 days after the surgery, your pet should be touching the toes to the ground at a walk

If your pet does not follow a normal progression of recovery, the surgeon should be notified

Surgery has approximately a 90% success rate. Success is defined as the return of good function of the limb

By having the surgery done earlier, the chance of developing significant arthritis is decreased

In the event of an uncommon reaction to anesthesia, death may occur

Infection of the surgical site, although not common, can occur

Seroma formation over the pins

If exercise is not minimized for 8 weeks after the surgery, breakdown of the repair may occur, thus requiring a second surgery