Tumors of the Small Intestine

Most common intestinal tumors are lymphoma, leiomyosarcoma and adenocarcinoma

Leiomyosarcoma is commonly associated with bowel rupture and peritonitis

The digestive tract, located within the abdomen, consists of the stomach and intestines. Dogs and cats have a very long small intestine which digests food and absorbs nutrients into the body. The colon is a reservoir that holds feces. The lining of the intestine, called the mucosa consists of glandular cells that secrete mucus and epithelial cells that absorb nutrients. Beneath the lining layer is the lamina propria which contains many lymphocytes, and lesser numbers of mast cells and plasma cells. The final two layers include a connective tissue layer and then a layer of smooth muscle that propels food down the intestinal tract. The importance of the anatomical description is that various tumor types can form from each of these layers. For example, adenocarcinoma comes from the epithelial cells, lymphoma, mast cell tumor and plasmacytoma come from the lamina propria, fibrosarcoma and gastrointestinal stromal cell tumor originate from the connective tissue layer and leiomyosarcoma originates from the muscle layer.

The most common types of intestinal tumors include lymphoma, adenocarcinoma, and leiomyosarcoma. Approximately 70% adenocarcinoma tumors metastasize, and 30 to 50% of leiomyosarcoma tumors metastasize. These two tumor types most commonly afflict Collies and German Shepherds. The Siamese develop intestinal adenocarcinoma more often than other breeds. Lymphoma has two forms that are most commonly seen in the intestine. One form diffusely infiltrates the intestine and the other form is a gross mass within the intestinal wall. The diffuse form frequently infiltrates the entire bowel, therefore nutrients are not absorbed well from the intestinal tract. In cats. a specialized DNA test (called PCR) has implicated the feline leukemia virus to be an underlying cause in some cases. Less common tumors include mast cell tumors, plasmacytomas, fibrosarcoma, extraskeletal osteosarcoma, and gastrointestinal stromal cell tumors.

Vomiting, diarrhea, anorexia, depression, weight loss, and dehydration are common nonspecific signs of an intestinal tumor. An intestinal tumor can weaken the bowel, thus causing it to rupture. With leakage of contents into the abdomen, a serious infection results. Clinical signs of this may include acute depression, vomiting, fever , abdominal pain, crying, not willing to lie down or sitting in a praying position.

Abdominal ultrasound is a very useful tool used to diagnose an intestinal mass. Complete blood count, chemistry, and urinalysis results are used to check the health of the intern organs. Chest x-rays are used to identify visible (macroscopic) evidence of spread of cancer to the lungs and lymph nodes.

The anesthesia and surgical team will prescribe a pain management program, both during and after surgery that will keep your companion comfortable. This may include a combination of general anesthesia, injectable analgesics, and oral analgesics. 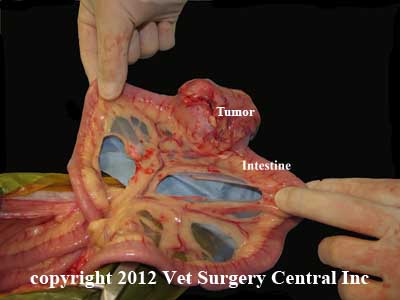 and the bowel is sutured or stapled together. Biopsies are collected from the intestines, liver, lymph nodes, or another other organs and submitted to a pathologist for evaluation. While in our hospital, the pet will continue to receive intravenous fluids, and antibiotics. The pet is monitored in the intensive care unit for a 2 to 3 night hospital stay.

Once your pet is at home, a prescribed analgesic is administered for a few days to minimize discomfort. A bland diet such as Hill’s i/d or Eukanuba Low Residue diet is fed. Alternatively, a home made diet (50:50 mix of cooked chicken breast, turkey breast or lean hamburger and potatoes or pasta) can be fed for 3 days at home followed a period of 3 days during which the diet is gradually transitioned to a normal diet. Exercise is limited to 10 minute leash walks three times daily for three weeks after surgery. The incision should be evaluated daily for signs of infection. A follow-up evaluation is completed by the surgeon or your pet’s primary care veterinarian in two weeks after surgery.

Uncommon complications after surgery may include continued vomiting due to inflammation of the intestines and a localized infection of the incision. Peritonitis, an infection of the abdominal cavity, is usually caused by bowel incision leakage that usually occurs within the first 5 days after surgery. Signs of peritonitis may include anorexia, vomiting, fever, and abdominal pain. If the bowel is leaking at the site of the bowel resection, another operation will be needed to repair the bowel.

Overall mean survival time of 21.3 months following leiomyosarcoma was found in one study; in another study the survival time was 8 months. Approximately half of the dogs had bowel perforation, peritonitis, and increased risk of death in the perioperative period. Other reports indicate that the previous diagnosis of leiomyosarcoma in some cases is in error and the actual diagnosis is gastrointestinal stromal cell tumor (GIST). A study that differentiated between leiomyosarcomas and GIST with special testing demonstrated a survival of dogs with leiomyomas to be 8 months versus 37 months in the group that had GISTs.

Dogs with diffuse intestinal lymphoma generally have very short survival times, however, if a solitary lymphoma tumor in the intestine can be removed and the remaining parts of the bowel do not have extensive diffuse disease; survival is increased to 6 to 9 months with surgery and chemotherapy. In cats, the median survival time is highly dependant on whether the lymphoma is a small cell or large cell (blastic) lymphoma. Patients affected by the small cell lymphoma potentially can survive for 1 to 2 years, whereas the blastic form results in death usually within 4 to 6 months in most cases. One study showed that about 50% of the cats treated for intestinal lymphoma had complete remission with survival times greater than 650 days; 37% had partial remission and a resulting survival time of 122 days.

Mast cell tumor of the small intestine generally carries a poor prognosis with most patients deceased at 2 months postop.