Stomach Tumors in Dogs and Cats

Surgical removal of the tumor is largely palliative

Prognosis is guarded, however, surgery may help relieve tumor-associated symptoms

The gastrointestinal tract consists of a tube that runs from the mouth to the anus. Its function is to digest food and absorb nutrients into the body. The stomach is a dilated part of the GI tract that produces acids which helps with initial breakdown of proteins. The small intestine extends from the stomach to the colon and serves to further breakdown food into absorbable nutrients. The cells lining the small intestine are distinctly different from that of the stomach.

Cancer can develop in the stomach in dogs, but rarely in cats. There are two major types of cancer that affect the stomach: benign and malignant. The cancer of the stomach usually is malignant and has a high tendency to spread to other parts of the body. If it spreads, the liver and the lymph nodes are commonly affected, however, the tumor can also spread to the lungs. Lymphoma (commonly in the feline species), adenocarcinoma and leiomyosarcoma comprise the majority of malignant stomach tumors. Benign leiomyomas such as extramedullary plasmacytoma and leiomyomacan also affect the stomach, are easily treated with surgery and have a very good prognosis.

Breeds that more commonly develop stomach cancer include the Rough Collie, Staffordshire bull terrier, Belgian Shepherd dog and Chow chow and the median age of affected dogs is 9.5 years of age. The Belgian Shepherd breed potentially has a genetic predisposition to developing gastric adenocarcinoma. The primary signs that the pet owner may see at home include vomiting, drooling, decreased activity, decreased appetite, black stools, and weight loss. Your companion’s veterinarian may also detect abdominal pain, but palpation of an abdominal mass is uncommon. 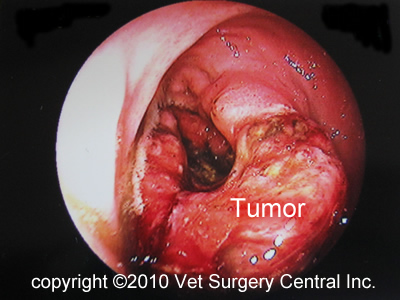 The diagnosis of a stomach tumor is made upon examination of the inside of the stomach with a telescopic camera called an endoscope. A less sensitive test that may also identify a stomach tumor is an x-ray of the stomach following ingestion of barium contrast material. Confirmation of the type of tumor necessitates a biopsy, which may be done at the time of endoscopic examination of the tumor, but is frequently done after the tumor has been removed. Tests done prior to surgery may include a complete blood count, blood chemistry profile, and urinalysis to check internal organ health. Chest x-rays and abdominal ultrasound are required to rule out visible spread of the cancer.

Our anesthesia and surgical team will prescribe a pain management program, both during and after surgery that will keep your companion comfortable. This will include a combination of general anesthesia, injectable analgesics, epidural analgesia, oral analgesics and anti-inflammatory medication. The surgeon will call you with an update following your companion’s surgery. 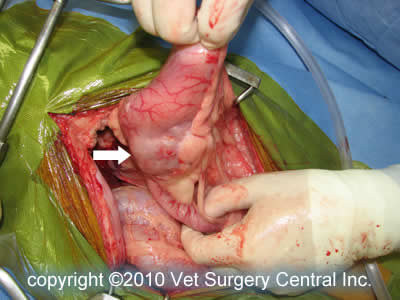 Chemotherapy is usually recommended if the tumor is malignant. This medication will be administered every two to three weeks via intravenous injection by our oncologist for a total of four to five treatments. The treatments are typically done on an outpatient basis and may take a total of 90 minutes to complete each visit. Unlike humans, most dogs do not lose their hair and usually have only mild side effects from the medication, which may include transient loss of appetite and vomiting.

At home, you can continue to give your pet a prescribed pain reliever to minimize discomfort. It’s also extremely important to limit your dog’s activity and exercise level for three weeks after surgery. The incision should be checked daily for signs of infection. An ant-acid may be prescribed for about 2 to 3 weeks after surgery to prevent formation of stomach ulcers. Two weeks after surgery, the surgeon will monitor the healing process and our oncologist will initiate chemotherapy.

Short-term complications following surgery are uncommon and may include temporary bleeding at the surgical site, infection, stomach ulcers, dehiscence (stomach incision opens) recurrence of vomiting and death. Tumor recurrence or spread of the cancer is a common sequel following surgery.

The most common tumor, gastric adenocarcinoma carries a guarded prognosis as 76% of dogs have metastasis at the time of diagnosis (in 132 cases). Overall survival times are commonly less than 6 months, however in the studies listed below the mean survival was 8.5 months (only 17 dogs had follow-up data). The median survival time following treatment of cats with gastric lymphoma with a Madison-Wisconsin chemotherapy protocol is 10 months. Dogs with a gastric leiomyosarcoma can be potentially cured with surgery alone, but the literature for the most part indicates similar survival rates as gastric adenocarcinoma. Benign tumors also can be cured with surgical excision.