Periorbital cysts are rare in dogs.  Masses around the eyes may be cysts arising from the lacrimal or zygomatic salivary gland, epithelial or epidermoid cysts, abscesses, granulomas, cancer, and trauma.

Dacryops are cysts that originate from the duct of the lacrimal glandular duct, and a canaliculops is an outpouching of the lower tear duct collection system . Ota et al. described three Labrador Retrievers in which dacryops was confirmed via histopathology and smooth-muscle immunostaining. Cystic structures developed from ectopic lacrimal gland ductal tissue, and in two dogs, dacryocystorhinography confirmed that the nasolacrimal system was closely related to, but not communicating with the dacryops.

In a number of cases described in the literature, the cause of periorbital cysts is unclear. Due to anatomic localization, these have been suspected to be associated with the tear duct.  Zemljič et al.  described an orbitonasal cyst in a cat which was located just in front of the eye and extended through the medial orbital wall and the nasal cavity. On biopsy, a non-neoplastic cyst was diagnosed which was suspected to be related to the lacrimal canaliculus or nasolacrimal duct. Lin et al.  and Featherstone and Diaz  described a maxillary bone epithelial cyst in a Miniature Schnauzer and in a Labrador Retriever. Ito et al.  described a periorbital cyst in a Miniature Dachshund which was suspected to be an epithelial cyst.

Periorbital epidermoid cysts in the medial side of the eye have been described by Davidson and Blanchard  in three dogs. A maxillary cholesterol granuloma in a dog was reported by Mould.

The important question is why do these cysts get so big and destroy the surrounding bone. Pressure is the suspected pathophysiology which causes expansion of the cyst and destruction of the bone.  The pressure develops due to secretion of fluid from the cells that line the cyst, thus causing it to grow in size.  If infection develops, it could also potentially cause expansion of the cyst size.  Expansion of a periorbital cyst into the nasal cavity through a defect in the maxillary, lacrimal and frontal bones is commonly demonstrated with CT scan.

Dogs with this condition have a swelling that is located just in front of the eye on the side of the face. 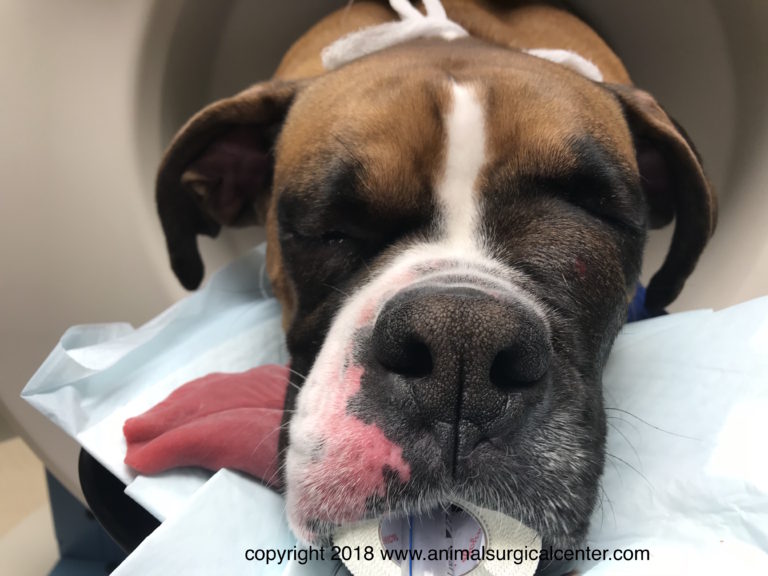 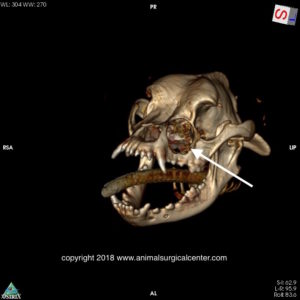 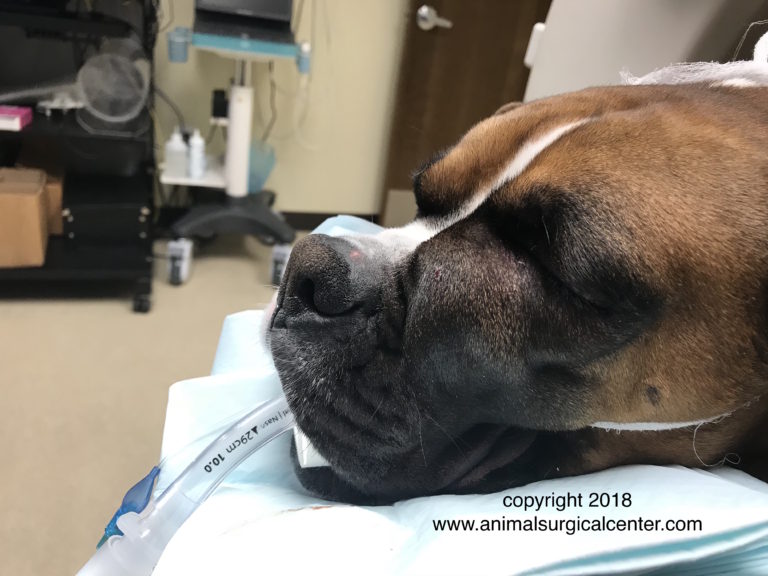 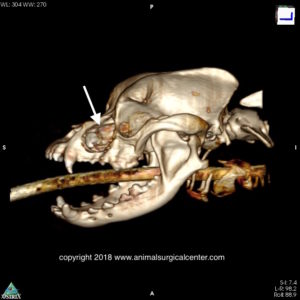 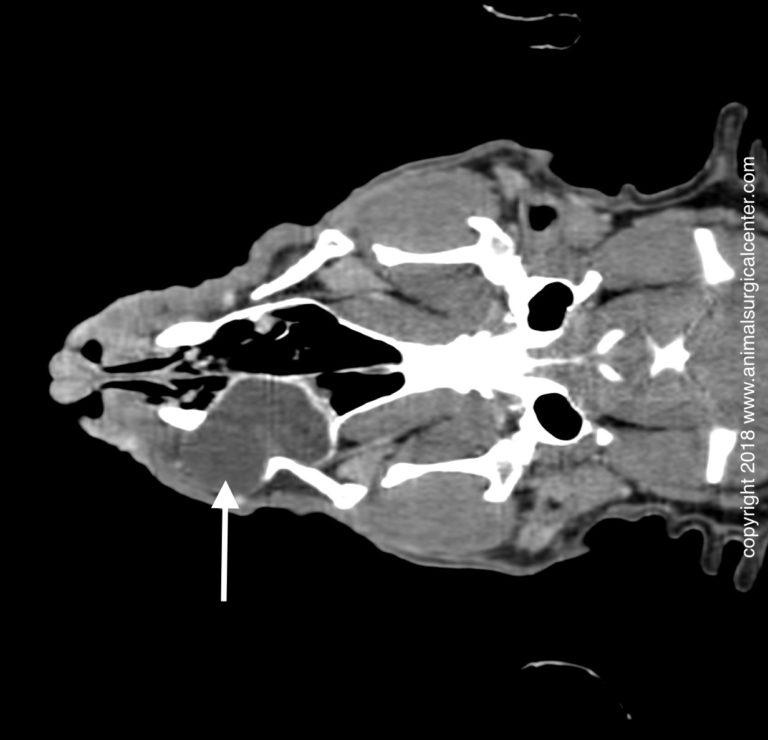 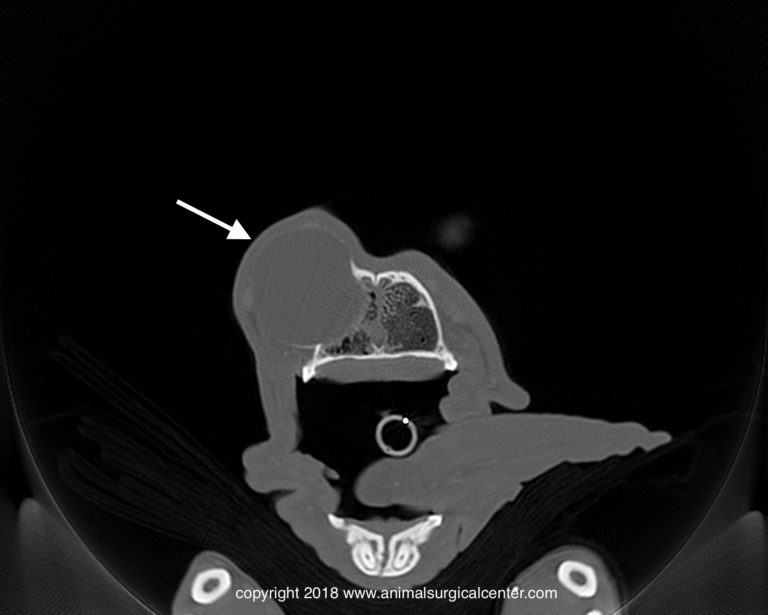 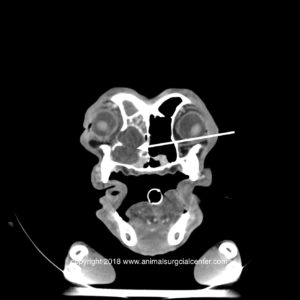 The goal of surgery is to create an opening between the dependent region of the cyst and the nasal cavity so that the fluid can drain into the nasal cavity.  If the frontal sinus drainage pathway is also obstructed by the expanding cyst, an opening into frontal sinus is also made.  The approach to the cyst can be made through the gum (gingiva) via the oral cavity. With the use of an endoscope that is placed in the cyst cavity, the size of the surgical incision is minimized and the medial wall of the cyst is removed.  With this approach, the infraorbital nerve, artery and vein may be encountered, but should be spared. If frontal sinuses are obstructed, the dorsomedial wall of the cyst is removed.  Upon opening the frontal sinus, very thick mucus will be found, which is a sure sign that the surgeon has made the appropriate entry into the sinus.  Care must be taken to avoid entering into the brain, as these cysts can be adjacent to the cranial vault. The endoscope also should be passed through the nares into the nasal cavity to ensure that an adequate amount of the medial wall of the cyst is removed.  Inadequate removal of the cyst wall could result in scaring of the opening which results in reformation of the cyst cavity.

An alternate surgical approach to these cysts can be made via an external skin incision over the cystic structure.  This more dorsal approach allows for a larger exposure to the medial cyst wall, however, leaves a scar externally and is more invasive to the patient.

Patients that have periorbital cysts usually have a good prognosis with surgery. 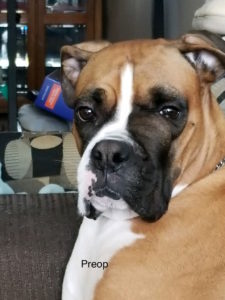 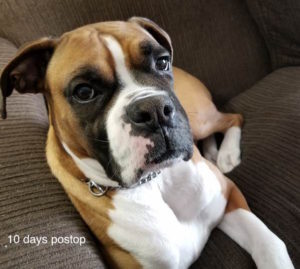