- Patients having surgery frequently have a good prognosis, providing that the tumor is self-contained and the surgeon can completely remove the tumor

Metastatic liver tumors are those that spread from a primary tumor else where in the body example is a dog that has a tumor of the spleen which has spread to the liver. Metastatic liver tumors generally are usually manifested as multiple masses within the liver.  With that said, multiple liver masses they could just be benign nodular change (hyperplastic regenerative nodules) which has a good prognosis and does not require surgical removal.

Vomiting, loss of appetite, weight loss, yellow color of the skin and eyes (jaundice) and lethargy are potential clinical signs of the liver tumors.  Most patients that present to us have no obvious clinical signs of illness, and the liver mass may be incidentally discovered on x-rays or ultrasound being performed for as a routine screening diagnostic or found when a pet is investigated for elevation of liver enzymes.

Testing done for patients in preparation for surgery

Blood work in the form of a Complete Blood cell count, Chemistry profile and Coagulation profile are baseline tests that are commonly completed.  Abdominal ultrasound is commonly done to initially diagnose the present of a liver mass; however, CT scan of the chest and abdomen is our advanced imaging modality to define the borders of the tumor, determine which vessels are feeding the mass and to rule out spread of the tumor to other parts of the body. Fine needle biopsy of the liver mass is occasionally recommended if there is concern for a type of cancer called lymphoma which is a type of tumor that is treated with chemotherapy. 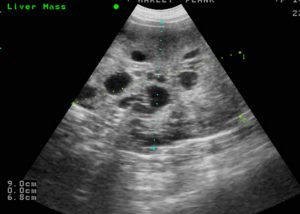 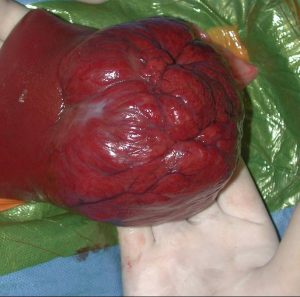