Kidney Tumors in Dogs and Cats

Kidney tumors are uncommon in dogs and cats

Indications to remove a kidney include

Dogs and cats have two kidneys. These organs lie within the abdomen along side of the spine. The kidneys are essential filters that remove toxins and wastes from the blood. Kidneys produce a hormone that stimulates the bone marrow to make red blood cells. They also maintain the correct balance of water, various salts and minerals in the body. Each kidney is connected to the urinary bladder by a ureter, a tube for transport of urine.

The kidneys have small filters that remove waste from the blood stream. About 20% of the total blood that is pumped out of the heart goes directly to the kidneys. The kidneys produce a hormone called erythropoietin that directly stimulates the bone marrow to produce red blood cells. Failing kidneys, therefore may cause anemia. The kidneys also regulate the amount of electrolytes (salts) such as sodium, potassium and calcium that is contained in the body. The pH of the body is also controlled by the kidneys via the excretion or retention of acids. They also control the amount of water that is excreted in the urine, thus helping to prevent dehydration of the body. A dog, cat and many other species live a normal life with only one kidney. In fact, they can live fairly normally with slightly more than two-third’s of one kidney. 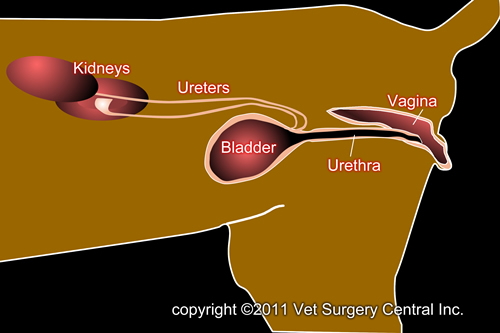 The diagnosis of a kidney mass is made on abdominal x-rays or abdominal ultrasound. Advanced imaging such as abdominal MRI or CT scan can be used to define the extent of the kidney tumor, but also may be used to determine if metastasis is also present. Chest x-rays are essential to rule out the presence of metastasis to the lungs and lymph nodes within the chest. Blood work and urine testing is done to ensure that the unaffected kidney is functioning normally and other internal organs are healthy. 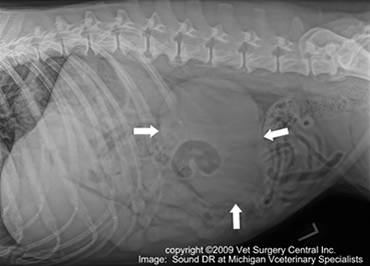 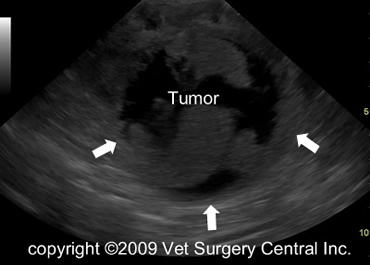 Our anesthesia and surgical team will prescribe a pain management program, both during and after surgery that will keep your companion comfortable. This will include a combination of general anesthesia, injectable analgesics, epidural analgesia, oral analgesics and anti-inflammatory medication. 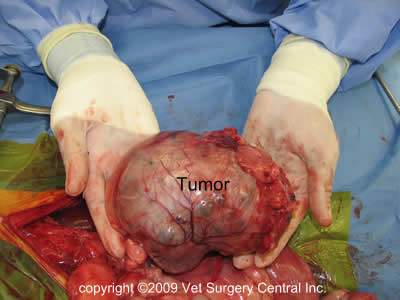 Nephrectomy or surgical removal of a kidney is the best treatment for a kidney tumor, providing that the patient is not in kidney failure. An incision is made along the abdomen to expose the internal organs. The blood vessels and ureters of the affected kidney are tied off and the kidney is then removed. While in our hospital, your companion will continue to receive intravenous fluids, electrolytes and in some cases plasma or an artificial plasma product called Hetastarch. Uncommonly, a blood transfusion may be necessary. Your companion will be carefully monitored in the intensive care and will be given narcotics to ensure a pain-free recovery. Most patients that have abdominal surgery leave our hospital within 24 to 72 hours. 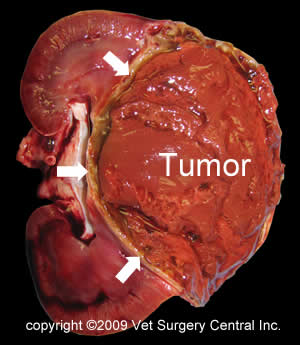 Once your pet is at home, a prescribed pain reliever should be given to minimize discomfort. If the pet is not eating, a home cooked diet containing a 50:50 mix of cooked rice and lean cooked hamburger meat or chicken breast can be offered. It’s also extremely important to limit the activity and exercise level for three weeks after surgery. The incision should be checked daily for signs of infection. Two weeks after surgery, the surgeon or oncologist will evaluate the healing process. Short-term complications following surgery are uncommon and may include internal hemorrhage, infection of the incision, and kidney failure.

Renal cell carcinoma (renal carcinoma) is the most common primary renal tumor in felines and canines. These tumors have aggressive malignancies with the potential for widespread metastasis in 50-70 percent of canine cases. This tumor commonly spreads to lung, liver, and regional lymph nodes. Reported survival ranges in dogs are variable, depending on the study, with a median of 16 months.

Patients that received chemotherapy survived a few months longer than patients receiving only surgery, however this was not found to be statistically significant. At the time of death of affected patients, 77% had evidence of spread of the tumor, in spite of treatments given to the patient.

In cats, the incidence of metastasis at the time of diagnosis was reported to be 64% for renal carcinomas and 100% for transitional cell carcinomas. Seemingly, the prognosis may be poorer for cats that have kidney tumors than dogs.