By definition, a gallbladder mucocele is an accumulation of thick mucus within the gallbladder

Surgical removal of the gallbladder is typically recommended

The liver contains very small bile channels (tubes) called canaliculi that collect bile from the liver cells. These ducts join larger and larger ducts that ultimately terminate in 3 to 5 visible ducts that empty bile into the gallbladder. The common bile duct (technically called the “bile duct”) is the final stretch of tubing that delivers bile into the first part of the small intestine. The gallbladder is nestled between two liver lobes on the right side of the liver. Bile, which is concentrated by the gallbladder, serves as a vehicle for fat absorption. Cholecystokinin, a hormone that is released from the pancreas when food is consumed, causes the gallbladder to contract and expel its contents into the intestine via the bile duct.

Cause of gallbladder mucoceles

Gallbladder mucocele is more prevalent in mid-aged to older medium-sized breeds of dogs such as Cocker Spaniels, Miniature Schnauzers and Shetland Sheepdogs. Most dogs with a mucocele have nonspecific signs such as vomiting, loss of appetite and lethargy. Other signs that may be found on a physical examination include abdominal pain, jaundice, elevated respiratory rate, fever and elevated heart rate. 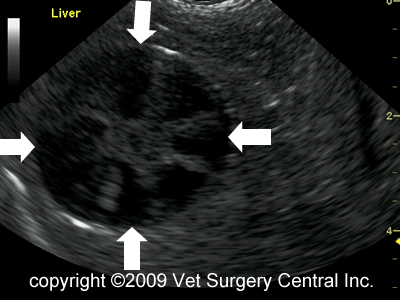 Emergency surgery will be recommended if the gallbladder is ruptured. If the patient is stable and the gallbladder is still intact, surgery may be scheduled the next day. If your companion has elective gallbladder surgery, make sure that your companion has been fasted prior to surgery and that the prescribed dose of Pepcid AC has been administered on the morning of the procedure. The surgeon will contact you after the surgery to give you a progress report after the surgery. Our anesthesia and surgical team will prescribe a pain management program, both during and after surgery that will keep your companion comfortable. This will include a combination of general anesthesia, injectable analgesics, and oral analgesics. 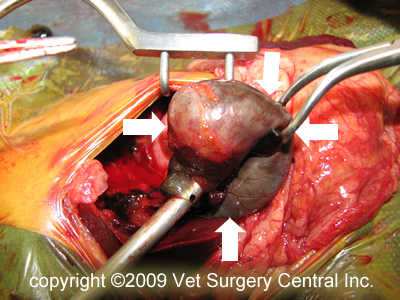 Medical therapy may be recommended in select cases; however, surgery is typically needed in most cases. Surgical removal of the gallbladder is the treatment of choice. In some cases, a stent (rubber tube) may be placed in the common bile duct, to ensure continued flow of bile. Following surgery, the patient will receive pain-relieving medication to ensure a comfortable recovery. Intravenous fluids will be administered to ensure that your companion remains hydrated after surgery. Blood testing will be performed after surgery to monitor your companion’s recovery.

The perioperative mortality ranges from 22 to 32%; however, rupture of the gallbladder has been shown to worsen the prognosis when infection is present. Long-term survival of patients that have undergone gallbladder removal is excellent. Liver enzymes remain elevated in most patients, but these values usually are much lower after the healing process is completed.

At home, the incision should be checked for signs of infection. Your companion should not lick the incision, as this could open the incision or cause infection. If necessary, an Elizabethan collar can be placed on your companion to prevent licking and chewing at the surgical site. A low fat diet may be recommended in some patients; however, a regular diet may be tolerated. Antibiotics may be prescribed after the surgery if bacterial infection is suspected or confirmed by culture results. Exercise should be restricted for about 3 weeks after surgery to allow uncomplicated healing of the incision.