Vaccination can cause the formation of a highly invasive tumor

In 1979, an outbreak of rabies in wildlife was noted. At that time, there were very few cats that were vaccinated for rabies and the fear that domestic cats would contract rabies from wildlife and be a threat to humans. The need for vaccinations had become evident. In 1985, two aluminum adjuvant vaccines, feline leukemia and rabies were developed and subsequently used clinically. A few years later, veterinarians were reporting vaccination reactions. Some of these were biopsied and found to have inflammation with a core of brown unidentifiable material. It was suspected that the material was the aluminum adjuvant, the vaccine itself or a combination thereof. In 1991, Hendrick reported the first vaccine-associated sarcoma. Others have reported the development of a sarcoma at the site of the excised vaccination reaction. Interestingly, some cats developed multiple sarcomas located at each vaccination injection site. Epidemiologic associations first were made with feline leukemia and rabies vaccination and later with feline panleukopenia and feline rhinotracheitis vaccines. 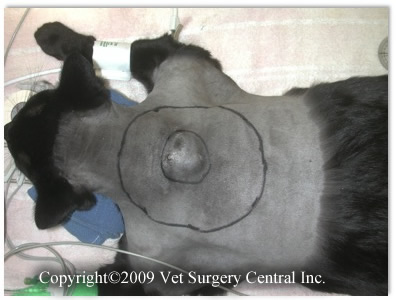 Cats can develop a lump (mass) at the site of a vaccination injection. Usually the mass will resolve spontaneously and does not form into a cancer. In general 1:10,000 vaccinated cats will develop cancer due to the vaccination. If a mass has been present for more than 3 months, if it is greater than 2 cm in size, or if it has increased in size one month after the vaccination was administered, then a biopsy of the mass should be performed. If a cat has had a tumor removed due to vaccinations and later is vaccinated, early tumor recurrence is likely. Vaccine-associated sarcomas Cancer can develop in the layer of connective tissue between the skin and muscle. These tumors have microscopic cells that extend like roots deeply into surrounding tissues. For this reason, recurrence of the tumor following tumor surgical removal is very common. Although only 3 to 5% of the patients will have spread of the tumor to the lungs, skin, subcutaneous tissues, region lymph nodes, chest, liver and pelvis at the time of initial diagnosis, with time the spread rate increases to 24%. 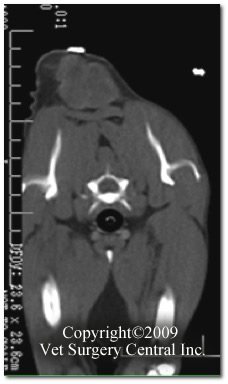 The typical sign of a vaccine-associated sarcoma is a mass (lump) at the site of a vaccine injection site. The most common locations for vaccination-associated masses include the back, shoulder blades or on a limb. The mass commonly is firm, nonpainful and frequently is attached to the skin or underlying muscles. Most patients do not feel ill when the lump is first found. If left untreated these masses can become ulcerated and infected. With time they can spread to lungs and other parts of the body and cause breathing difficulty, anorexia and weight loss. The diagnosis of a vaccine-associated sarcoma necessitates a biopsy. Additional tests done prior to surgery may include a complete blood count, blood chemistry profile, Feline immunodeficiency virus infection test, Feline leukemia virus test, and urinalysis to check internal organ health. Chest x-rays and are used to rule out visible spread of the cancer. A CT scan (see left) helps the surgeon develop a plan to surgically remove the tumor.

Our anesthesia and surgical team will prescribe a pain management program, both during and after surgery that will keep your companion comfortable. This will include a combination of general anesthesia, injectable analgesics, local anesthetics, oral analgesics and anti-inflammatory medication. 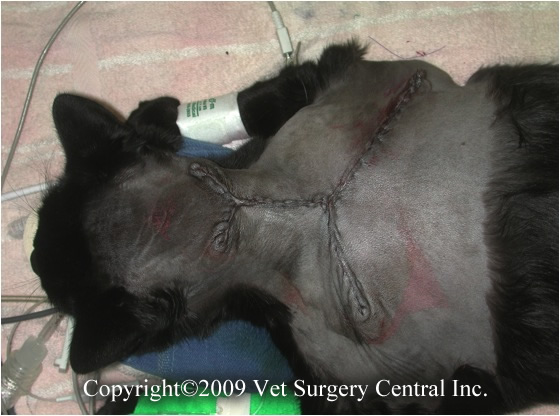 Surgery is an essential treatment for vaccine-associated sarcomas. For the best outcome, sarcomas should never be shelled out of their bed. The tumor and a large zone (2 to 5 cm) of surrounding skin, fat and muscle should be removed. If the tumor is located on a limb, amputation is essential for a good outcome.

Chemotherapy may be recommended and is administered every three weeks via intravenous injection by our oncologist for a total of four to five treatments. The treatments are typically done on an outpatient basis and may take a total of 90 minutes to complete each visit. Unlike humans, most cats do not lose their hair and usually have only mild side effects from the medication such as transient loss of appetite and vomiting.

Radiation therapy has been shown to improve the survival of patients that have surgery may be used to shrink an inoperable tumor or used to kill residual cells that may be present. Radiation is administered daily (Monday through Friday) until 18 to 21 treatments have been completed.

After surgery, a prescribed pain reliever should be given to minimize discomfort. It’s also extremely important to limit your companion’s activity and exercise level for three weeks after surgery. The incision should be checked daily for signs of infection. Two weeks after surgery, the surgeon will monitor the healing process and our oncologist will initiate chemotherapy or radiation therapy if indicated by the biopsy report.