Fatty tumors commonly are only a cosmetic issue

Fatty tumors involving the thigh, armpit (axilla), in the throat and other vital areas can be functionally problematic and mandate surgical removal

Infiltrative lipomas do not spread, yet recurrence is a problem

Liposarcomas are locally invasive and have a relatively low spread rate

Lipomas are benign tumors that are composed of fat. They can be located in many different locations on the body. Commonly, these tumors are soft and located between the skin and muscle layers. These tumors are freely moveable. Sometimes they are located between the muscles and seem to have a more firm consistency and are not moveable. Lipomas can be located anywhere within the body. These tumors are slow growing, but frequently will grow to a very large size with time. Most of these tumors are cosmetically displeasing to the pet owner, yet some will impede bodily function. Lipomas growing between the muscles of the limb will eventually impede the function of the limb and cause lameness. If located in the throat area or beneath the tongue, breathing or swallowing difficulties may be noted. Lipomas are frequently multiple on the body and do not spread to other parts of the body. Lipomas are classified as simple (noninfiltrative) or infiltrative. Simple lipomas are easily dissected out of the body. Infiltrative, as the name implies, is a type of fatty tumor that has grows into adjacent muscles and tissues. These tumors have a moderate tendency to recur, but these tumors do not metastasize. Liposarcomas are malignant fatty tumors that may metastasize to other parts of the body.

Lipomas are seen in mid to older dogs. Cats rarely develop lipomas. Lipomas are tumors that frequently are not attached to underlying tissues (freely moveable), however, may seem so if they are located between muscle layers. Other more serious tumors may mimic the appearance and feel of a benign lipoma. One example is a mast cell tumor located in the fatty tissue (subcutaneous tissues) beneath the skin. For this reason, even tumors suspected to be a lipoma should always be biopsied. If the tumor is growing rapidly, and it previously was diagnosed as a lipoma based on fine needle biopsy, another biopsy should be done. We have also seen some combination tumors such as lipoma combined with mast cell tumor and lipoma combined with a sarcoma – in such cases a diagnosis of only a lipoma was made prior to surgery, yet the patient had another concurrent tumor in the same mass. For this reason it is advisable to submit all removed lipomas for histopathology (biopsy analysis).

Below are examples of lipomas in canine patients:

Lipoma under the tongue 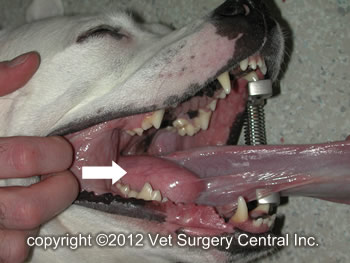 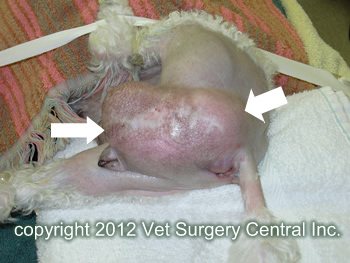 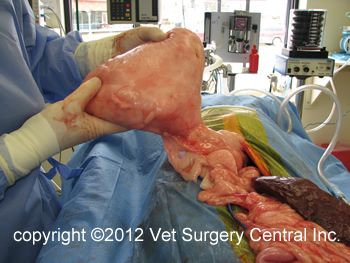 Lipoma on front of chest 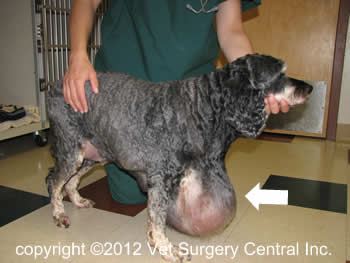 Lipoma between the thigh muscles; note the very thickened thigh 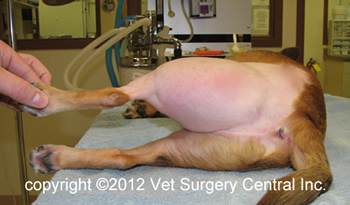 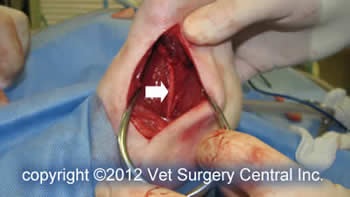 Simple lipoma removed from thigh above 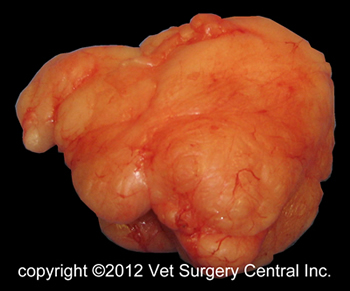 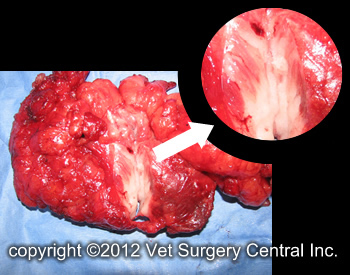 The diagnosis of a lipoma is made by a fine needle biopsy. This involves inserting a needle into the mass, aspirating a small sample from the mass, spaying the sample on a glass slide, staining the sample with cytology stains, and examining the sample under a microscope. Fat cells or fatty droplets are seen under the microscope. Ultrasound, CT scan or x-ray may be needed to determine the extent of the tumor when it is located in regions that are difficult to operate. Diagnosis of an infiltrative lipoma is largely is based on finding fatty infiltration of muscles and fascia at the time of surgery and the biopsy will also confirm the gross surgical findings. Liposarcomas may require collecting a larger biopsy sample (core biopsy or wedge biopsy) to achieve a preoperative diagnosis. In preparation for surgery, preoperative blood work including a complete blood count, chemistry profile, and urine testing are recommended to ensure that your pet is healthy and can safely undergo anesthesia and surgery.

The pet should be fasted prior to surgery, as instructed by the surgical team. Water is usually permitted up to the time of admission to the hospital. An antacid such as Pepcid AC may be prescribed and should be administered by 6 AM on the day of surgery; this treatment will help reduce the risk of esophagitis (heartburn) in the postop period. The surgical team should be informed of any medications that your pet is currently receiving. The pet should not receive any aspirin within 1 week of surgery, as this medication will thin the blood and increase the risk of bleeding. Just prior to surgery, your pet will receive a sedative, have an intravenous catheter placed for the administration of intravenous fluids and intravenous medications, be induced under general anesthesia with medication(s), and have a breathing tube (endotracheal tube) placed to allow delivery of oxygen and gaseous anesthesia. The surgical site will be clipped and cleansed with an anti-septic solution in preparation for surgery. While under general anesthesia, the pet’s breathing will be assisted with a ventilator and vital parameters such as heart rate, respiratory rate, core body temperature, blood pressure, oxygenation of the blood (pulse oximetry), exhaled carbon dioxide (capnography), and heart rhythm (EKG) will be monitored to ensure the pet’s well being. Pain will be controlled both during and after surgery with analgesics (pain-controlling medication). Please note that each surgical and anesthesia team may elect to chose a different, but effective analgesia protocol.

An incision is made over the lipoma that is to be removed. Simple lipomas can be removed with relatively small incisions. If there is a very large void (dead space) where the tumor was previously removed, a drain may be inserted to help prevent formation of a fluid pocket in the surgical site. This is done on a case by case basis.

Infiltrative lipomas require a much more aggressive surgery with removal of any muscle or fascial tissues that are invaded with the tumor.

Liposarcomas require an aggressive resection with removal of the mass en bloc and a good margin of normal tissue.

Following surgery, the patient will receive pain-relieving medication to ensure a comfortable recovery. A combination of nonsteroidal anti-inflammatory, local anesthetics and narcotics are used to control pain. Intravenous fluid therapy is administered to ensure that your companion will remain well hydrated during and after surgery. Most patients can go home on the day of surgery. If an invasive and more painful surgery was performed, the pet may need to be hospitalized overnight to control pain. At home, the incision should be checked for signs of infection. Your pet should not lick the incision, as this could open the incision or cause infection. If necessary, an Elizabethan collar can be placed on your companion to prevent licking and chewing at the surgical site. Exercise should be restricted for about 3 to 4 weeks after surgery.

Recurrence of simple lipomas after surgery is uncommon. Thomson reported 11 cases of thigh lipomas, in which 10 of them had surgery. All of these cases had simple lipomas and no tumor recurrence was seen over a median follow-up period of 17 months. In my experience, about 5 to 10% of the lipomas within the thigh are infiltrative. Although many of these thigh lipomas are intimately associated with the sciatic nerve (can be wrapped around the nerve), I have never seen dysfunction of the limb due to sciatic nerve damage following lipoma removal.

Infiltrative lipomas recur in about 30 to 50% of the cases and it may take up to one year until the tumor needs to be debulked again. Bergman reported a recurrence rate of 36% with a median time to recurrence of 239 days; the median disease free interval 1 year post surgery was 67%. McEntee reported irradiation of infiltrative lipomas in 13 dogs. Ten of the 13 dogs had surgery to remove the tumor prior to radiation therapy. One of 13 cases had tumor recurrence. It is difficult to determine the benefit of radiation therapy, but there may be some benefit.

In a report of 56 patients, liposarcomas were found to be locally invasive, but uncommonly metastasized (4/56 patients). Median survival times were 1188, 649 and 183 days, respectively, for patients hat had wide excision, marginal excision and only an incisional biopsy. Factors that did not influence patient survival included tumor size, clean vs. dirty surgical margins, tumor location, and the histological subtype.