+Chylothorax can have many causes, but the underlying etiology often is not known

+ Surgery is the best treatment of choice

Chylothorax is the accumulation of chyle within the chest cavity. The majority of chyle comes from the intestines following absorption of fat from an ingested meal. The fat enters the lacteals (small lymph vessels) in the wall of the intestine and then is transported to the regional lymphnodes, passes through larger lymph vessels and joins the largest lymph vessel in the abdomen called the cisterna chyli. The location of the cisterna chyli is along side the largest artery in the abdomen called the aorta at the level of the kidneys. From there the lymph fluid moves through the chest via the thoracic duct, which finally joins a large vein in the chest called the vena cava. Thus the lymph fluid is delivered into the blood stream.

Chylothorax result from leakage of lymphatic fluid in the chest cavity through leaky lymph vessels in the chest. Obstruction to flow of lymph fluid can be due to increased pressure in the thin-walled lymph vessels. The obstruction of the lymphatic flow can be due to heart disease, cancer with the chest, fungal infections in the chest, heartworm disease, congenital defects, trauma, chronic vomiting, coughing, diaphragmatic hernia, twisted lung lobe, and a blood clot in the veins in the chest. Although rupture of the thoracic duct logically seems like it should be the most common cause of chylothorax, studies have shown that the thoracic duct is grossly intact in these cases. Even experimental tearing of the thoracic duct results in only transient chylothorax that spontaneously resolves in about 2 weeks. In most patients that have a work-up for chylothorax, a primary cause of this problem is not found therefore it is called idiopathic chylothorax.

Sex nor age seem to be a factor in the development of chylothorax. A number of breeds are predisposed to this condition and include cats, Afghans, and Mastiffs. Shallow, rapid respirations, and coughing are typically the most common presenting signs. Other signs may include loss of appetite, weight loss, gagging, lethargy, regurgitation, vomiting and exercise intolerance. 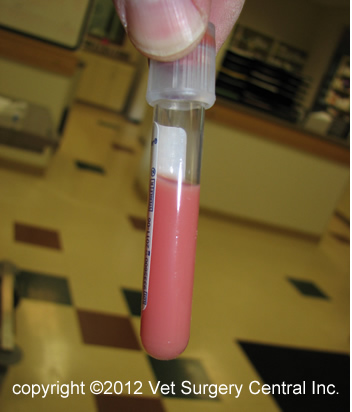 Chest x-rays will always show the accumulation of fluid in the chest cavity and collapse of lung lobes. Fluid collected from the chest with a needle is analyzed and will have a high level of trigycerides (fat) and can have a mixture of white and red blood cells (photo right shows typical appearance of chyle). Other testing that commonly is done includes repeat chest x-rays after draining the fluid from the chest, ultrasound of the abdomen and chest, and blood tests (complete blood count and chemistry profile, heartworm test, fungal titers if indicated).  At ASCM we routinely perform a CT lymphangiogram to define the number and location of thoracic ducts that need to be ligated.  This procedure is performed on a separate day as the surgery.  Contrast is typically injected into the paw pads of the hind limbs during this study, thus your pet may have some swelling of the paws which usually resolves in 24 to 48 hours.

Before surgery is considered, a low fat diet and a medication called Ruitin may be tried. If the problem resolves…great. The diet and Ruitin should be continued indefinitely. Intermittent removal of fluid from the chest with a needle will be necessary until the medical therapy becomes effective. Unfortunately, successful medical therapy is uncommon. If a patient has an underlying cause of chylothorax, treatment of the primary disease process (fungal infection, cardiomyopathy, etc) should resolve the accumulation of chyle in the chest.

The pet should be fasted prior to surgery, as instructed by the surgical team. Water is usually permitted up to the time of admission to the hospital. The surgical team should be informed of any medications that your pet is currently receiving. If there is an accumulation of fluid in the chest that is causing breathing difficulties, fluid will be removed with a needle or catheter prior to anesthesia.Just prior to surgery, your pet will receive a sedative, have an intravenous catheter placed for the administration of intravenous fluids and intravenous medications, be induced under general anesthesia with medication(s), and have a breathing tube (endotracheal tube) placed to allow delivery of oxygen and gaseous anesthesia. While under general anesthesia, the pet’s breathing will be assisted with a ventilator and vital parameters such as heart rate, respiratory rate, core body temperature, blood pressure, oxygenation of the blood (pulse oximetry), exhaled carbon dioxide (capnography), and heart rhythm (EKG) will be monitored to ensure the pet’s well being. Pain will be controlled both during and after surgery with analgesics (pain-controlling medication). Please note that each surgical and anesthesia team may elect to chose a different, but effective analgesia protocol.

Most pets having this type of surgery will stay in the hospital at least 3 to 5 days to monitor the pet for breathing difficulties. While in the hospital, intravenous fluid therapy likely will continue until the pet goes home. Oxygen therapy may be needed via a nasal catheter. A chest tube that is placed at the time of the surgery is used to evacuate fluid from the chest. The chest tube is removed once the fluid production is minimal.

At home, medication to control pain after surgery should be administered for a few days. Antibiotics are commonly prescribed, but only may be needed for a week or two. Exercise should be restricted for two weeks, but leash walks are generally permitted. A follow-up examination should be done in 2 weeks after surgery to evaluate the healing process.

The prognosis for patients with idiopathic chylothorax which ligation of the historically has been fairly poor with only about 50% of dogs and 25% of cats responding to treatment. With cisterna chyli ablation and thoracic duct ligation, about 80% of dogs have resolution of the chylothorax and go on to live a normal life.  No study on cats has been published to date showing how this technique works in cats.